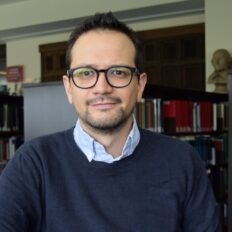 Pavel Andrade is Ph.D. Candidate in Hispanic Studies at the University of Pennsylvania. His doctoral dissertation, “Patterns of Accumulation: Capital, Form, and the Spatial Composition of the Mexican Novel (1962-2017),” studies the relation between literary form and the spatialization of capital in the context of Mexico’s uneven transition from state-led industrialization toward a new export-oriented pattern of capital accumulation. His broader research interests include spatial literary studies, border and migration studies, and the novel’s countertopographical imagination.

Pavel holds graduate specializations in Latin American Studies and World History, an M.A. in Hispanic Studies from the University of Pennsylvania, and a B.A. in Latin American Studies from Universidad Nacional Autónoma de México (UNAM). At Penn he has taught courses on literary analysis and Latin American cultural history with the Department of Romance Languages and the Lauder Institute’s Latin America Regional Program. In 2018 he co-founded Variations, an interdisciplinary working group focused on Marxism, critical theory, and literary theory. More recently, he founded the Mexican Studies Research Collective, an international network of scholars whose research focuses on Mexican literary and cultural studies. He is affiliated with Penn’s Wolf Humanities Center and the Center for Latin American and Latinx Studies.