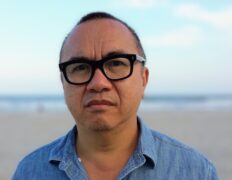 Ken Lum is an artist who has extensive international exhibition record, including numerous biennials and solo museum shows. He is co-founder and founding editor of Yishu Journal of Contemporary Chinese Art.  He is a prolific writer having published in an array of academic and non-juried publications. He has also worked on or curated several large-scale exhibitions, including The Short Century: Independence and Liberation Movements in Africa 1945 – 1994, Shanghai Modern: 1919 – 1945, Sharjah Biennial 7, and Monument Lab: Creative Speculations for Philadelphia. Lum is co-founder of Monument Lab: a Public Art and History Project. He is Marilyn Jordan Taylor Penn Presidential Professor in the Stuart Weitzman School of Design.