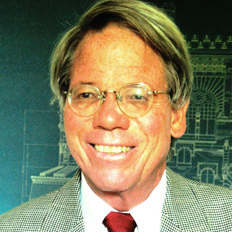 David Brownlee is a historian of modern architecture and urbanism whose interests embrace a wide range of subjects in Europe and America, from the late eighteenth century to the present.

Professor Brownlee has won numerous fellowships and grants, and his work has earned the book, exhibition catalogue, and article publication prizes of the Society of Architectural Historians. He is a recipient of the University of Pennsylvania’s Lindback Award for Distinguished Teaching.

In 2007-2012 he served as Editor of the Journal of the Society of Architectural Historians, during which time the journal created the platform for a multimedia online publishing that was subsequently adopted by JSTOR.

He has taught at the University of Pennsylvania since 1980, and he has served the university in many administrative capacities, including chair of the Department of the History of Art.  After heading the committees that proposed the comprehensive reshaping of the University’s undergraduate residences in 1997, he directed the implementation of the new system and served as Director of the Office of College Houses and Academic Services for four years.  He and his wife Ann were faculty masters of Harnwell College House for seven years.

Active in civic affairs, Professor Brownlee served for 15 years on the Philadelphia Historical Commission and chaired its designation committee.  During this time the Commission created the Rittenhouse and Society Hill historic districts.  He was a founding member of the Design Advocacy Group of Philadelphia, which he now serves as a vice chair.